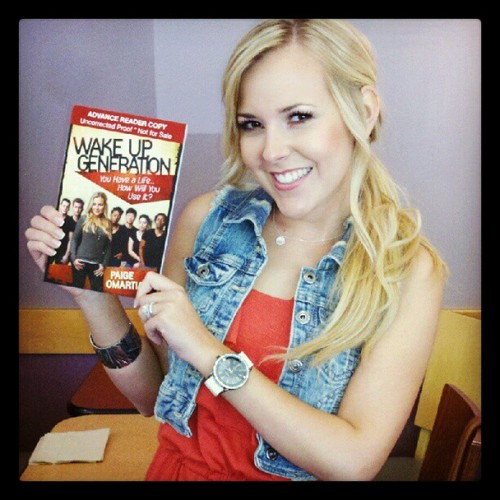 Paige Omartian is an amazing young woman who has inspired and encouraged me with every word I have heard or read from her mouth! She is most definitely ordained and appointed by God. She is so beautiful inside and out, and she’s extremely down to earth. I know this, because I have “personally” talked to her several brief times via twitter. She’s so kind and sweet, and if I didn’t know she was a celebrity, then I would think she is nothing more than a special friend of mine! At times, I have tweeted about Paige Omartian hoping she would see my tweet and somehow respond, and she has responded almost every time, but most often when I tweet her name, I’m only doing it so that my friends and followers will know who she is and why I respect her so much! My two favorite times she has ever responded are the following tweets: 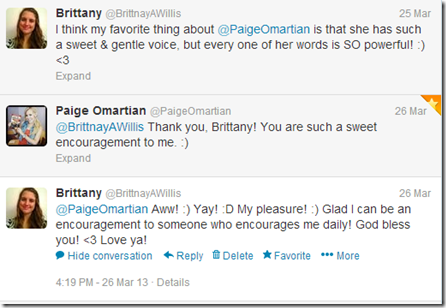 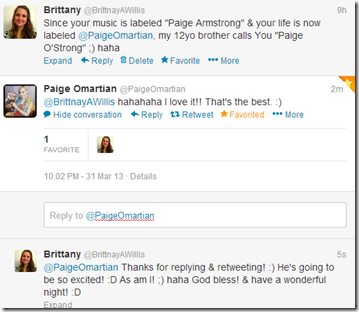 The first is my favorite because it makes me feel so amazing and blessed that I’m able to encourage someone who has encouraged and inspired me. The second is a favorite of mine because it made my brother so happy to know she responded to something he said, and that she loved what he said.

I encourage you to read the following essay about Paige Omartian, which I wrote in January of 2012, in order to truly understand why I believe she is such a beautiful, inspirational, and amazing woman of God!

A Paige out of God’s Book

Take a second, do not think, just breathe in and breathe out. So many people take their breaths for granted! Too many people do not see that, even with struggles and hardships, life is a very precious gift, which God has given to us for a very special purpose! Paige Omartian—formally known as Paige Armstrong—does however understand and believe in this truth. She has faced a giant, over come it with positivity and is now fulfilling her purpose in life. People, including Paige, say “Paige has a Story,” and that is true but more than that, Paige has a purpose.

“One day I was a normal little girl, and the next day I woke up in a hospital bed with tubes connected to me, losing my hair,” Paige said about her giant—bone cancer. “There have definitely been times that I wish I could erase the whole cancer thing…. But I’ve realized, even if I could go back, I wouldn’t. As horrible as [cancer] was, God used that experience to unleash his purpose in me. It is an essential part of my story. There are times I feel I have nothing worthwhile to give, or that God should just use someone else. But [when] I first thought that, God gave me the words to “Story Song”: ‘No one’s spared to just keep silent / No one’s saved to just keep still,’” she said in an interview with Christianity Today. She knew that cancer could have been the end of her, and she sometimes thought that God was punishing her for something, but when she got past thinking God was punishing her, she started to understand a deeper side of His love. After realizing God was the only thing carrying her through, she stayed positive and later God blessed her for her faith and positivity.[i]

One day she made a wish and the Make-A-Wish Foundation[ii] sent her to Nashville, Tennessee with her parents to record a “dream demo album”. Little did she know her simple wish would become a dream come true. After recording her demo, she found herself sharing her story and on such shows as, “The Today Show”[iii] and “Extra”[iv]. She also found herself featured alongside such stars as, Jessica Simpson and Martina McBride, on Bath & Body Works Holiday album in 2005.[v] Despite all of that, however, she was yet to have received her greatest dream come true. In 2009, she was able to release an album of her own called, “Wake Up,” which features self-written songs with a sound that she calls “spunk rock”.[vi] The only way to describe her music is the way she did when she said, “The music is incredibly edgy and the message is daring as it shares personal value and inspires each one of us to move off the sidelines of life, and into the adventure God has for us.”[vii]

Now that Paige is a cancer-free speaker, actress and singer/songwriter, she says, “Ultimately, it comes down to this: My purpose is to help other people find theirs.” With her bold and inspirational songs that are “meant to be a bold awakening to a generation that has fallen asleep in apathy”,[viii] she speaks of issues like self-image, purity and apathy. She wants every young person to wake up and realize that “our life is a mist, and we can’t waste it.” More than that, she feels the most important thing she can do is “lead hearts to the most beautiful thing: That we are valued beyond imagination. We are cherished, hand-picked, and placed on this earth with a mind-blowing purpose to fulfill.”[ix]

Paige’s story is her purpose. Her story is all about showing people that they have a purpose. Her purpose is to make them believe the truth in her favorite Bible verse, Romans 8:28, “And we know that all things work together for good to them that love God, to them who are the called according to His purpose.”[x]

Until next time this is Brittany Alexandria, daring you to keep obsessing over the things you love! Because we could always use more hope and passion in this world! xoxo

Find my podcasts “The Mask; Her Aid” and “Obsessive Girl Podcast” on your favorite podcasting platforms.

Buy my book “The Mask; Her Aid” by Brittany Alexandria on Amazon for Kindle.