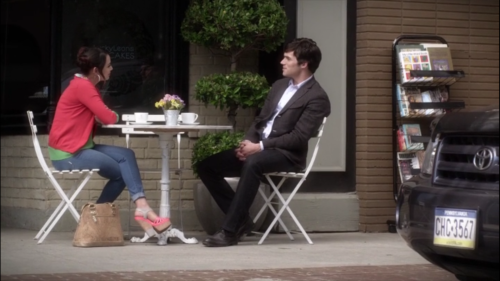 It is a proven fact that Ezra and Mona worked together, for some unknown reason, for at least one period of time as shown in episodes 14, 17, and 20 of season 4. From these episodes, we know that Mona seemed to feel very intimidated by Ezra, while he seemed to feel very threatened when she tried to back out of their partnership. With four episodes left until we get our biggest and most important clue about “Big A” and only two seasons of the show left, I’m sure the question of “What the heck were Ezra and Mona doing working together!?” will be answered. Until then though, I’d like to present my theories about them: Ezra’s Book, Working as “A,” and Working against “A.”

Being the boyfriend of Aria, who was one of Mona’s five victims when she was “A,” Ezra knew about everything Mona did to torture the girls; he also knew that “A” knows everything. Therefore, Ezra’s “get the story at all costs” mind, probably thought that asking Mona for help would give him an inside look that not even being Aria’s boyfriend could give him. Second hand knowledge can only get a writer so far. To get the full story, one must go undercover and actually witness the story as it happens. Thus, Ezra recruited Mona to watch the girls for a different reason than torture. He wanted her to watch them for information to add to his story. I think that is why Mona initially started to date Mike. I think she was using him to get closer to Aria, because Ezra, having broken up with Aria, couldn’t be as close as he once was. Then things got complicated though, she actually started to fall for him (what is it about the Montgomery’s? Anyone of the opposite sex who starts to get to know them seems to fall for them almost immediately). Mona even told Ezra that things were getting complicated, and Ezra seemed to know it was about Mike, but his response was, “It’s always been complicated,” because he was in love with Aria, the same way Mona was falling in love with Mike.

Many people theorize that Ezra has been excessively sketchy throughout the whole serious to have simply been writing a book. Mona has been proven to be psychotic and mentally unstable. They both knew Alison before she disappeared. They are also both the only people that Ali talked to “that night” whom she did not threaten and question about sending the “A” messages. They are the only people, other than the Liars and Toby, who have been in every mid-finale and season finale, as well. They both have tendencies of seeming extremely suspicious. Because we know that they have both done seemingly unforgivable things and been forgiven by Aria and Hanna anyway, it would seem that they would be the perfect culprits to continue the “A game.” Few people would suspect either of them of being “A,” now that they both have pretty evidence laden cover stories. That would be why they were working together in season four. Mona and Ezra were working together as “A” for a while, but then Ezra stole the game from her. (Marlene has tweeted that there is only ONE “A”) Mona could have thrown a fight, but she didn’t want to, because it would mean hurting Hanna again and hurting Mike by hurting Aria. Hanna was finally reconnecting with Mona in such a way that they had the potential of becoming best friends again and she and Mike were getting pretty intense in their relationship together. The last thing Mona wanted to do was ruin her friendship with Hanna again and ruin her relationship with Mike as well. Therefore, she didn’t initially fight when Ezra stole the game from her.

As things continued to heat up with her and Mike though, and as Alison reappeared to potentially steal Hanna away again, Mona started to look for “A” again. She wanted to prove to herself, the Liars, and most importantly Mike, that she really had changed and that’s why she was acting so sketchy. She was working with “A/Ezra” as a double agent in order to try to stop him.

Ezra is in love with Aria, Mona is not only in love with Mike, but also best friends with Hanna, and both Ezra and Mona have begun to grow pretty close to each of the other girls. Video and camera equipment is not cheap, and Ezra and Mona both had their own impressive collections of equipment. After giving up their original uses for their equipment, Mona and Ezra decided to join forces to protect the girls from “A.” As omnipresent as “A” is, I imagine that it would be impossible for Mona and Ezra to watch them so closely for their own reasons without also catching glimpses of “A” as well. “A” is clever, virtually undiscoverable, and incredibly sneaky, but no one is invisible to cameras and video cameras. At the very least, Ezra and Mona must be able to watch the videos back and trace “A’s” every move, thus being able to plot and plan ways to capture “A” in his/her tracks eventually. When Mona felt like she and Ezra had enough evidence on “A,” she decided to pretend to be on “A’s” side so that she could unmask him/her and gain the love and respect from the girls that she so desperately wants after turning their lives into living nightmares for two years. Both Mona and Ezra still feel guilty about what they did to the girls and feel as if, even though they’ve been told they’re forgiven, they’ll never fully redeem themselves unless they can capture “A,” reveal his/her true identity, and get him/her locked up forever.