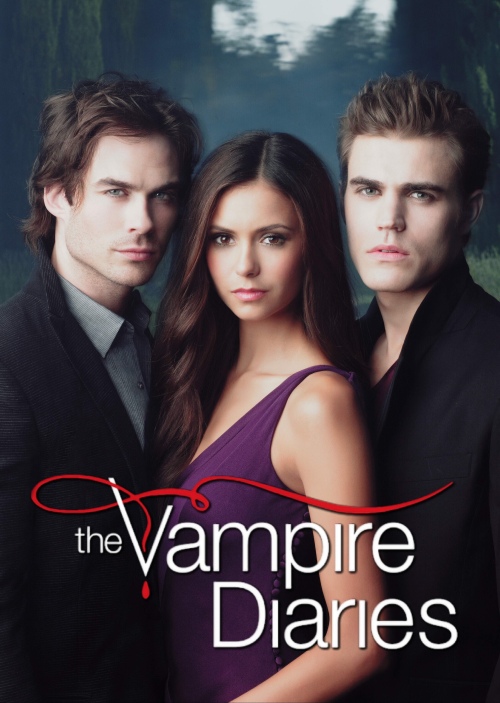 I’m not sure why, but I really have a thing for vampire stories. Especially when those vampire stories involve actors that I really like. So, of course, I’ve finally started to watch The Vampire Diaries. I’m going to attempt to recap as I watch it. So far, we’re off to a great start. Cindy Busby, aka Ashley Benson from Heartland, was the first victim. This vampire character, Stefan, really is kind of hot. And the creep factor vibes are on point already. So far, that’s just from the creepy raven or crow or whatever this bird is and the fog.

I like the mesmerizing eye powers vampires apparently have in this show. He doesn’t seem to be trying to use them on Elena though. It seems she’s using her “powers” on him. Not to mention he smells her blood and almost loses it on her. She falls near him in the cemetery where she’s visiting her dead parents and before she even realizes she’s been hurt, he smells the blood and loses it. Before that, she notices a random ring he wears.

Both of them keep a journal full of memories. Ha, ha. He shows up at her house to return her journal after picking it up. When she says, “You don’t have to stay out there,” it’s not enough of an invitation for him to come in so he kind of has to just stay there. He plays it off with an, “It’s okay.”

Stefan claims he lives with his uncle, but he really lives with his nephew. I guess Stefan grew up in Mystic Falls, but when he was turned a hundred or so years ago, he had to move. Now he’s back. At his house, he looks at a picture of someone named, Katherine from the late/mid 1800’s. Katherine looks identical to Elena. In the next scene, they’re in history class and Stefan educates everyone on a past historical event. I guess he’s one of the original settlers for Mystic Falls.

When he shows up at the first high school party of the school year, he uses his enhanced hearing abilities to find Elena who is talking to her friend, Bonnie, about him. Bonnie jokes about his romantic novel stare and he smiles. He meets up with her in the sneaky vampire speed kind of way and while they’re talking, his romance novel stare starts to turn into a creepy-eyed vampire stare. He disappears and the next scene shows a vampire attacking a high school girl, Vicki, who Elena’s brother Jeremy likes. Once again there is fog and a bird. Naturally, we’re left to assume it’s Stefan. I assume it’s his brother, Damon. When Jeremy is drunkenly walking through the woods, he lands on her. She’s lost a lot of blood, but she’s not dead yet.

Yes! It is his brother, Damon. I guess Stefan is the good vampire, the vegan vampire. Damon is clearly the evil vampire. He keeps killing people for the sake of messing up Stefan’s life. Then, he takes Stefan’s ring and we learn he wears it because it protects him from the sun. Good to know, because I was wondering why he wasn’t burning, or at least sparkling in the daylight. I’m assuming Katherine was Stefan’s true love or something and that he killed her or something, because he gets all fired up when Damon starts talking about her and comparing her to Katherine.

In the hospital, Vicki says one word to her brother Matt, aka Elena’s ex-boyfriend. “Vampire.”

It seems like this is going to be a show like One Tree Hill in that various scenes will have voice overs from at least Stefan and Elena as they write in their diaries, which makes the title of the show make sense. I never questioned the title until they started writing and they I realized it made sense. In the final scene, Stefan shows up at Elena’s house and she invites him in. The relief on his face when he says yes is almost tangible.

I’m not entirely sure how I feel about any of this yet. I mean, it’s certainly intriguing. Stefan specifically says he has to get to know her. Probably because she looks like this Katherine person.

Episode one review of The Vampire Diaries. So far, so good. The violence isn’t too much. Sex is discussed, but so far at a sort of minimum and not spoken of or shown in too much detail. Language hasn’t been used at all yet. So, in terms of appropriateness, I’ll give it a three. We’re only two episodes in, so we’re still establishing relationships and they’re still in high school. I’m sure by the end of the series they won’t be in high school which, as with Buffy the Vampire Slayer, will probably mean less subtly with the TV-14 stuff. I cautiously approve of this show so far. Hopefully it remains at three stars so I can get to season 3 and 4 when Claire Holt (Emma Gilbert from H2O: Just Add Water) and Phoebe Tonkin (Cleo Sertori from H2O: Just Add Water) come in and eventually The Originals where Phoebe is in almost every episode and Claire is in about half the episodes. We shall see how it continues tomorrow.