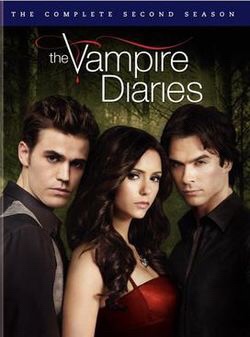 Caroline wakes up and leaves her room wondering where everyone is. The nurse says it’s late at night. Caroline is hungry. She wants something to eat. She smells something. She’s not sure what it is. Someone’s heart monitoring is beating. She smells the blood being given to the patient. She tries to drink it, but the nurse catches her. She was able to get the blood pouch. She drinks it and gags. She drops it, but then picks it up again and drinks all of it.

Caroline puts her hand out in the sunlight and burns. Matt comes in to check on her. He goes to kiss her, but she turns away and fakes a cough. He tells her she get’s to get out tomorrow morning. She freaks a tiny bit. Matt opens the blinds and she shies away from them, ordering him to close it back.

Caroline puts her jewelry on and when she tries to put on her vervain necklace from Elena, it burns her and she throws it. She drinks more blood and her face and teeth start to vamp up freaking her out. The nurse comes to check on her. She compels the nurse into not telling anymore. She feeds on the nurse.

Caroline compels the nurse to say her neck is because “her husband likes to get kinky.” She calls her mom to say the doctor signed her out.

Caroline shows up at the school and tells Damon she’s starting to remember everything about him. He doesn’t believe her. it’s impossible unless… “I have a message from Katherine. She says Game on.”

Caroline shows up at the carnival and flirts with Matt. When he hugs her, she’s enticed by him and quickly walks away.

Caroline walks out of the carnival crying. The guy is out there nursing his wounds. She finds him, apologizes, and goes to town on him. Poor guy. First he’s attracted to a witch. Then, he fights two werewolves. Now, he’s being eaten by a vampire.

Matt talks to Bonnie about Caroline.

Damon pulls a stake from one of the tents.

Elena asks Stefan if he agrees with Damon. Damon doesn’t agree with Damon about what they should do but what will happen.

Stefan worries that he can smell blood, but Damon finds her first. “He’s dead. I killed him. What’s wrong with me?” He tries to comfort her. She knows he’s going to do something to her. He tells her he’s going to kill her. She begs him not to. She begs him to really help her. He hugs her with the stake in his hand. When he goes to stake her, Stefan stops him. Caroline freaks out at the sight of Elena and asks why she looks like her and why she did this to her. Stefan tries to take her inside. Damon goes to stake her again, but Elena jumps in the way. “Damon she’s my friend.” They stare each other down. “Whatever happens. It’s on you.” He walks away and in comes Bonnie freaking out; denying the truth. Bonnie walks away. Stefan takes Caroline away. Elena goes to comfort Bonnie.

Caroline is worried Bonnie hates her. Stefan tries to assure her she’s in shock. He assures her about her heightened senses are normal right now. He encourages her to fight it. He helps her take deep breathes and make her vamp face disappear. She asks why Katherine did this to her. Stefan promises he won’t let anything happen to her. He holds her. I wonder if they’re going to have a thing later on.

Matt climbs through Caroline’s window. She tells him to leave. He tells her almost dying really freaked him out and he’s pretty sure he’s in love with her. Now it seems like she doesn’t feel the same way. She passionately kisses him and when they hung, her face vamps up. She practices the breathing trick Damon taught her.

Bonnie and Elena talk about how creepily alike she and Katherine look. They’re helping setting up for a carnival. Bonnie asks if she’s talked to Damon. “No, Bonnie, I haven’t. And I won’t. And I don’t want to talk about Damon or anything else that’s vampire related. Okay? I’m human and I have to do human stuff. Otherwise, I’m going to go crazy.” Yay! Second season in and she’s STILL handling most of this vampire stuff in a sensible, realistic human way!

Bonnie and Elena talk about how the Carnival is a success and Elena is surprised she can do more than wreak vampire havoc. Some guy starts flirting with Bonnie when they ask him for help.

Damon comes back. He tries to get Elena to help bury the body. Bonnie does the brain thing on Damon. She tries to light him on fire. “I told you what would happen if someone else got hurt.” Damon and Elena both say this wasn’t his fault. “Everything that happens is his fault.” Elena begs her to stop. He gets lit on fire. Elena shakes her free of trying to kill him. “Why did you stop me?” “Because this isn’t us. Bonnie this can’t be us.”

Stefan explains vervain and other ways to kill a vampire to Jeremy. He asks him to try to forget about Damon, because he’s 100x stronger than him and currently unpredictable.

Damon tells Jeremy it’s good to see him alive. Jeremy threatens to blow the whistle on who Damon really is. Damon threatens him back and takes his ring off to prove he could really kill him if he wanted to.

When Damon goes to the parlor, Jeremy is there waiting for him. He stops him from drinking the alcohol, because he laced it with Vervain so he could stake him. He tells Damon he figured he should stand for something like his father and uncle did. Damon tells him his father hated vampires too.

Elena tells Stefan this carnival is about being normal teenagers. They are not allowed to discuss the v-word or the d-word.

Damon pours himself blood in the parlor and offers Stefan some. Damon thinks it’s funny Stefan is trying to be so careful with him; he wonders if Elena is worried too and assumes he’s their every conversation. Stefan asks if Damon’s seen Katherine again. Damon talks about the Lockwood’s. Stefan claims they don’t know why Katherine came back. Damon says it’s because of her undying love for Stefan, so he’s gonna let him deal with it.

Damon goes to Elena. Elena tries to ignore him. But he’s urgent.

Damon tells Elena and Stefan about Caroline. Stefan wants to find her. Damon wants to kill her. Elena says no. Stefan agrees. Damon reminds them of Vicki and that Caroline’s mom is the captain of the vampire hunters. Stefan is silent as Damon and Elena go back and forth. Stefan is aware this might be bad, but he agrees not to kill her.

Elena worries about Damon being right about Caroline. Stefan promises to make him wrong. “I don’t know why I thought it could be [normal]. My best friend’s a witch. My boyfriend’s a vampire. And I have a doppelganger who’s hellbent on destroying all of us.” Stefan apologizes. She assures him, “It’s no one’s fault. It is what it is. It’s just… you know what, I’m okay. I’ll see you tomorrow.” She walks away to go home.

Stefan wakes Elena up with a kiss at dawn. He wants to give her the normal experience she wanted to have before. She hesitates. He reminds her they have to take their moments when they can. When she asks him how they’re going to get to the top, he tells her to hold on tight and jumps to the top of the Ferris wheel so they can kiss like she wanted to.

Mrs. Lockwood tells Damon she’ll be acting as interim mayor until the elections and she needs someone to spearhead the council. She wants him to do it.

Damon listens in as Tyler and Mason talk about his aggression asking if he has episodes and if it gets better when he works out. He says he blacks out. He wants to know if there’s a pattern. Once a month? Only at night? Yup. A werewolf!

Mason goes in the office looking for something. Tyler catches him. Mason says he’s looking for an old family artifact, a moonstone. Tyler says to ask his mom.

The guy does pick a fight with Tyler. Stefan watches as Mason jumps between them. All three of them fight. Mason’s eyes go werewolf and he jumps like crazy. Stefan runs after the guy to make sure he’s okay when Tyler and Mason run off.

Tyler questions Mason about his eyes. Mason tries not to tell him. “You saw me get pissed off that I had to pull your delinquent ass out of a fight.”

Mrs. Lockwood tells Mason she’s glad he’s in the house. She thinks he’ll be good for Tyler and she’ll try to dig up the moonstone. I wonder if the moonstone is what keeps them from wolfing up?

Tyler goes looking through his dad’s valuables and finds the moonstone under a floorboard.